Abstract: Chondrodysplasia is a genetically-determined skeletal disorder that occurs primarily in the purebred Alaskan Malamute. The purpose of this article is to describe chondrodysplasia and to outline its relation to the veterinary practitioner. 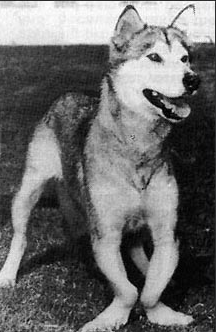 For a number of years Alaskan Malamute breeders in both Canada and the United States have been aware of occasional litters which contained deformed or "dwarfed" puppies. But it was not until the early 1970's that these puppies were conclusively proven to be the manifestation of a genetic disorder. At first these affected dogs were known as "dwarfs" because of their diminutive size. This term however gave rise to considerable confusion with the dwarfism found in Hereford cattle. So another name, chondrodysplasia, was coined and brought into usage. This disorder, however, does involve far more than simply faulty cartilage maturation. Perhaps when it has been fully understood and defined, then a more comprehensive name will be in order.

Inheritability
Chondrodysplasia is transmitted as a simple autosomal recessive trait. Its mode of inheritance was determined by mating all combinations of unaffected, recessive carrier, and affected animals, until a total of one-hundred-fourteen (114) puppies had been produced. Identification of chondrodysplasia as a simple recessive has led to catagorization of the Malamute into three distinct genotypes. (1)


​The term "dan" is taken from a concatenation of the words "dwarfism anemia".  d = dwarfism    an = anemia 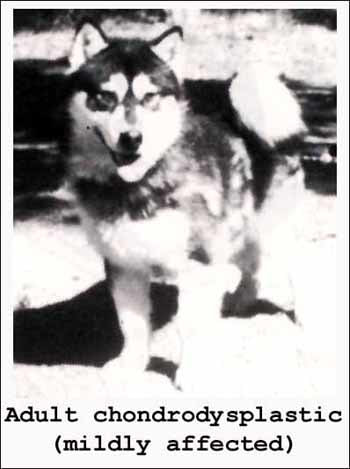 Chondrodysplastic puppies, up to twelve weeks of age, are readily identifiable by radiographs of the carpal joint. Although all endochondral bones in the chondrodysplastic animal are affected, the condition is most apparent at the distal end of the ulna. In a normal puppy the distal metaphysis of the ulna appears V-shaped and evenly opaque, consistent with normal ossification and development.

In the chondrodysplastic puppy, the distal metaphysis of the ulna is distinctly flattened and irregular, with a blunt widening of the distal diaphysis. There is variable evidence of normal ossification. The physis is increased in width with an irregular metaphyseal margin. (2)

Radiographs of chondrodysplastic and normal animals have been placed on separate pages. You can click on the thumbnail images below to view them in much more detail.

​It is important to note that the sloping topline of many chondrodysplastic animals is a manifestation of alteration in conformation of the limbs and is not related to changes in the axial skeleton. The varying degree of topline slope is a direct result of the malformation which develops in the front limbs. The tubular bones at the distal radius and ulna are the most severely affected and growth retardation is excessive. The bones of the hind limbs are much less severely affected and achieve a more normal conformation. Some chondrodysplastic animals may display near normal conformation. Diagnosis of genotype in such cases must then be made by either test-mating the animal or by blood work. (3) 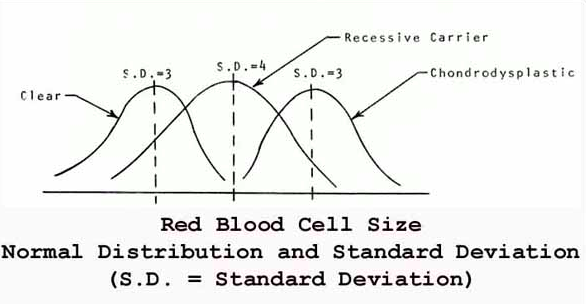 As noted earlier, after twelve weeks of age, radiographs no longer provide a positive diagnosis of chondrodysplasia due to changes in the carpal joint. To diagnosis an older animal, it is necessary to utilize a blood profile.Dwarfism affects more than just the front limbs. There is an associated inherited hemolytic anemia that is characterized by morphologically abnormal red cells known as "stomatocytes". In addition to the stomatocytes, the anemia is characterized by increased red cell size (MCV), decreased mean corpuscular hemoglobin concentration (MCHC), and a normal amount of red cell hemoglobin (MCH). The red cell sodium content is increased while the percent solids is decreased.

The following table summarizes some of the work done by Dr. Sheilah Fletch. A second table shows the specific values for three dwarfs. The table of ranges was originally published in the Journal of the American Animal Hospital Association. (6)
​
The left side of the table shows the ranges of three blood parameters (MCHC, MCV, and MCH) for the three phenotypes of the Alaskan Malamute, namely clear, carrier, and chondrodysplastic. The second table shows the same three blood parameters for three known dwarfs (Cameo, Munchkin, and Duke).
​ 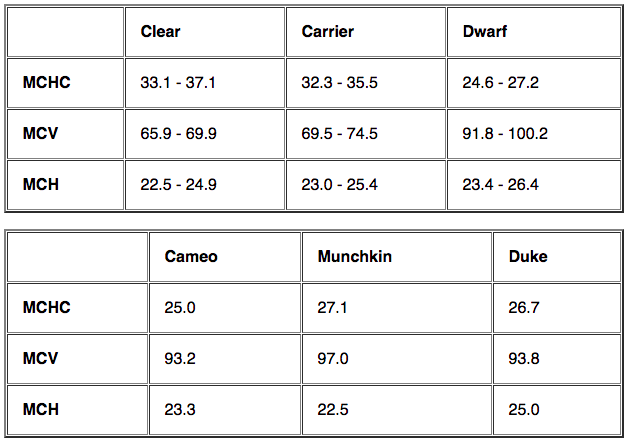 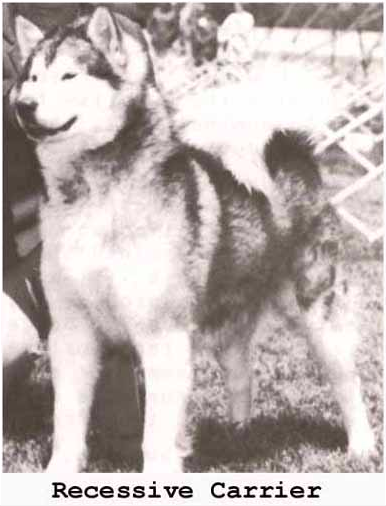 The AMCA set up a screening and control program to address the problem of chondrodysplasia in the Alaskan Malamute. Initial screening was done by means of pedigree analysis. (7)  Using the dog's pedigree, a statistical analysis was performed based upon the number of ancestors that were either known carriers or closely related to known carriers. The analysis yielded a number expressed as a percentage. This number represented the dog's chances of being a recessive carrier of the gene, based upon the configuration of ancestors. If the number exceeded 6.25%, the dog was considered to be in the "suspect" or "potential" category. The value of 6.25% was selected because it represented one known carrier as a great-great-great-grandparent and also corresponds roughly to a 95% confidence level (04.37%). (7)

If the pedigree analysis indicated the animal fell into the "suspect" category, two recommendations were made to the owner.
Another method of testing, based on the blood profile of the animal, saw limited utilization. It was considered superior to pedigree analysis but not as good as test-breeding.

If all the test puppies in the litter are radiographically normal, then ? = +, and the genotype of the unknown is statistically identified as being clear. If however one or more chondrodysplastic puppies are detected, then ? = dan, and the suspect animal is conclusively proven to be a recessive carrier. Such an animal should be removed from all further breeding, unless it is the control dog in the test-mating of another suspect animal.

In test-mating with a known recessive carrier, then:

If none of the puppies are chondrodysplastic, then ? = +, and the animal is animal is statistically identified as clear. Upon replacing the symbol "?" with the appropriate symbol "+", collection of terms leads to a more familiar form for this equation.

If one or more chondrodysplastics are detected in the litter, then ? = dan, and the "suspect" animal is conclusively proven to indeed be a recessive carrier. Again, replacement of symbols (? = dan) and collection of terms leads to the well-known "25-50-25" equation.

Test Litter Minimums.  It is important to note that for all test-matings, the number of test puppies must be great enough to be statistically significant before the dog can be considered clear of the gene. This means a minimum of five puppies for testing against a chondrodysplastic (confidence level = 96.88%) and ten in testing against a recessive carrier (confidence level = 94.37%). Because of these statistical constraints, more than one test litter may be necessary for a single animal. (7)

Test litters are normally radiographed at four to six weeks of age. A high-detail A/P projection of the distal radius and ulna of one leg is needed of each puppy in the litter. Several puppies may be included on one sheet of film, thus reducing costs for the owner. Utilization of lead or leaded vinyl/rubber sheets as film blockers (or close collimation) will avoid radiation fogging on multiple exposures. The film should be clearly marked with the owner's name, name of sire, name of dam, number of puppies in the litter, and date of birth of the puppies.

Any dead puppies that have been preserved by freezing should be radiographed at this time. These are frequently inconclusive due to age, however, and it should be understood they may not be included in statistical evaluation unless chondrodysplasia is clearly evident. (8)

Radiographs must be evaluated by a professional who is familiar with chondrodysplasia, and the following information should be included.

Test-litter puppies, even though normal in appearance, must not be allowed to slip back into open breeding. Where one parent is a chondrodysplastic, all normal puppies in the test litter are recessive carriers of the gene. The AMCA approved of the following methods for handling test puppies.
Early sterilization encompasses tubal ligation on puppy bitches and vasectomy on puppy dogs. It is normally done between five and eight weeks of age. The AMCA produced a brochure on the early sterilization process. (9)  The only exceptions to the stated methods of disposition of test puppies would be the holding of chondrodysplastics, or possibly carriers, to be used as control animals in further test-breeding.

To a very limited extent, hemalological testing was utilized as a third method of screening dogs. The process did not prove to be a valuable weapon in AMCA's arsenal however. The necessity of baselining each laboratory's instruments and procedures against a control group of known genotype dogs in order to establish normal values ultimately made the process infeasible.In blood testing, eleven different parameters were measured from a sample of blood. These parameters were then submitted to a statistical computer program that enhanced differences and weighted all values in order to determine the most likely genotype for that particular blood sample. Misclassification rate on the control group of fifty dogs was approximately 6% in either direction. (10)

Perhaps in the final analysis, the immensely valuable contribution of the blood test will be recognized as having conclusively demonstrated that the heterozygous animal has measurable differences from the clear animal.​

My thanks goes to the following people who contributed their time and knowledge. Without their help and advise, this article would not have been possible.