This brochure, produced by the Alaskan Malamute Club of America, Inc., describes a method of rendering very young puppies incapable of reproduction. The procedures described were developed by AMCA member John Schmidt DVM and fellow veterinarian Dan F. Rice DVM. They were originally developed for the safe handling of puppies produced by test-breedings for chondrodysplasia, a genetic disorder that affects Alaskan Malamutes.

For many years breeders have wanted a method of birth control that would render very young puppies incapable of breeding so that they could be sold as pets and not become a part of the breeding population. It is important to breeders to have these procedures completed before a pup is seven to eight weeks old as many prefer to make placements at that age. Such results may be obtained by salpingectomy (tubal ligation) in the bitch puppy when she is as young as three weeks old and by vasectomy in the male puppy when he is about 5 1/2 weeks old. These procedures are acceptable by the Chondrodysplasia Committee for handling puppies from test litters. 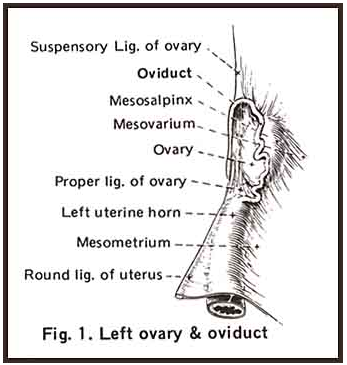 Puppies should be examined carefully prior to surgery. They may be anesthetized and prepared for surgery by the standard methods used in any veterinary practice. In the female a small incision is made into the abdominal cavity caudal to the umbilicus and the ovary is elevated through the incision. The oviduct is easily seen in the mesovarium (see figure 1). It is grasped with forceps; a small section is removed and the cut ends are cauterized. The same procedure is repeated on the opposite side. Both ovaries are returned to the abdominal cavity and the abdominal incision is closed by standard methods. Please note that only a small portion of the oviduct is removed. The uterus and ovaries are left intact 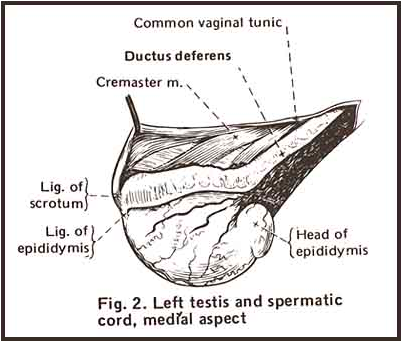 Vasectomy in the male may be done as soon as the testicles are descended to the scrotum, usually when the puppy is about five weeks old. A single small midline incision is made cranial to the scrotum and a spermatic cord is elevated through the opening. A small incision is then made in the common vaginal tunic of the spermatic cord. The ductus deferens is located in a medial fold of the cord along with a small artery and vein (see figure 2 and 3). The ductus deferens is separated from the artery and vein; a small section is removed and the cut ends are cauterized. The common vaginal tunic is closed around the spermatic cord but usually no sutures are required to close this incision. The procedure is then repeated on the opposite cord. Fascia and skin are closed by standard methods. Again please note that only a small portion of the ductus deferns is removed. The testicles remain intact.
​ 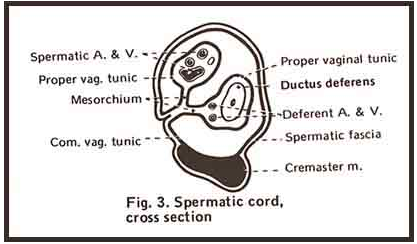 ​Prospective owners of the pet puppies should be fully informed of the procedures that have been done. A bitch will still come into estrus and show all the signs of a normal heat. She will stand for a male but cannot conceive. It is suggested that bitches be confined when in heat and should be spayed at the usual time recommended by the veterinarian. This will prevent the undesirable manifestations of estrus and eliminate the possibility of later reproductive tract problems.
Figure 1 and 2 are from: "Anatomy of the Dog":Miller, Christiensen & Evans. W.B. Saunders Co., Philadelphia.
Figure 3: "Guide to the Dissection of the Dog": Miller. Lithographed by Edwards Bros. Inc., Ann Arbor, Mich. Cornell Univeristy, Ithaca, New York. 1952