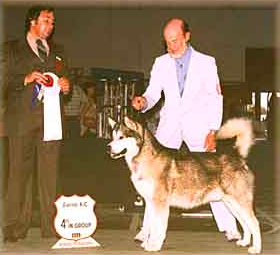 Following the discovery of day blindness, or hemeralopia, in Alaskan Malamutes, Dr. Kenneth Bourns, of Boru Kennels wrote the following article. It was originally published in "Dogs In Canada" in March 1968 and was reprinted in the book "The Complete Alaskan Malamute", by Maxwell Riddle and Eva B. Seeley. "Dogs In Canada" has graciously granted permission to post the article on the Minnesota Malamute Club's Web page.

What should we do when a serious defect crops up in our kennel? Should we ignore it, hoping that it will go away? Should we outcross, hoping to cover it up? Should we neuter or destroy the dogs producing it? What, indeed, should we do? Just this problem faced us at Boru Kennels eight years ago when we discovered that three Malamute puppies in a litter of ten seemed to have difficulty seeing in the daytime, but not at night. What follows is a step by step case history of the discovery of a disease and of the way it was handled, and is presented not only to acquaint the reader with the nature of the condition but also to show that in some cases at least, undesirable traits can be eliminated without recourse to the actions suggested above. It is also hoped that those who shy away from the word genetics may discover that the elements are not at all difficult to understand--to the contrary, they are amazingly simple.

The condition to be discussed can be detected in pups at seven weeks of age, when one notices that under daylight conditions they bump into objects and seem to be unsure of distances. Indoors, in dim outdoor light, or at night, the affected pup's vision is as good as that of a normal dog. Indeed, an affected animal that we know of is an American Champion, having performed well at indoor shows. Since the condition does not worsen with time, a protected dog, having learned the positions and distances of all hazards, may lead a restricted but happy life. In strange surroundings, however, he will undoubtedly come to grief by carreening into an unseen wire fence or, perhaps, something worse.

Having become aware of the defect in our puppies, we wrote to a number of breeders with related stock, telling them of our problem and hoping that some light would be shed on the situation. To our surprise, no one had seen anything like it; to our disappointment, most seemed disinterested; to our consternation, some suggested that we hd better say nothing about it--"It might hurt the breed".

After our veterinarian and a local ophthalmologist determined that there was nothing structurally wrong with the eyes, we were referred to the Ontario Veterinary College, Guelph, Ontario, where Dr. L.H. Lord and his colleagues studied the pups and named the disease "Hemeralopia" (Day Blindness). At this time we didn't know whether or not the defect was caused by something in the environment or whether it was genetically-determined. To answer this question we and Dr. Lord undertook a series of test-matings using the parents and littermates of the affected pups, and soon established that Hemeralopia is an inheritable disease. Shortly after this we learned that a breeder with related stock in the U.S. had encountered Hemeralopia. Also, at this time Dr. Lionel Rubin of the University of Pennsylvania Veterinary School became interested, and with the cooperation of our American colleague, Dr. Rubin and we continued to carry out experimental breedings in order to determine how the defect was inherited. We knew, of course, that for most characteristics a genetic message is received by an animal from each of its parents. We assumed that there exists a gene for what we might call bright light vision and that two alternative forms of alleles of the gene exist. One would be, essentially, an "instruction" HAVE NORMAL BRIGHT LIGHT VISION, and the other would be the alternative "instruction" HAVE HEMERALOPIA. We knew, too, that genetic messages can operate in any of three basic ways. The first of these is that one "instruction" may dominate over the other so that the puppy will "obey" one and "ignore" the other even though it received that latter and will pass it on to the next generation. The second involves the reverse of this and is concerned with the "ignored" or recessive "message". If a characteristic is inherited in this way it will be exhibited by the puppy only if the same "instruction" was delivered by both parents (if this were not so, the alternative or dominant "instruction" would have been received and would have been "obeyed"). The third, called blending or incomplete dominance, is seen when a puppy "compromises" and turns out to be about half way between the conflicting "instructions". Perhaps at this point it might be wise to underscore the fact that an allele is not dominant, period, it is dominant to something and that something is its alternative allele. Similarly, an allele that is called recessive is recessive to its alternative. In the present case, then, we had to determine whether or not the HAVE NORMAL VISION "instruction", or allele, was dominant or recessive or incompletely dominant to its alternative allele HAVE HEMEROLAPIA.What one must do here is to determine what would happen in different matings if HAVE HEMERALOPIA is the dominant allele, if it is the recessive allele, or if it shows a blending effect with the alternative "instruction". 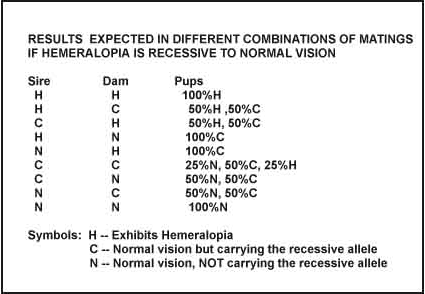 ​The latter possibility was ruled out in our case because there were no detectable grades or in-betweens of vision. Each dog was either normal or Hemeralopic. Further, the fact that our first Hemeralopic pups were produced by parents whose vision was normal implied that Hemeralopia was not dominant to normal vision but was probably recessive to the normal condition. With this in mind we constructed a table to illustrate the work (see Table). Then we compared the results actually obtained in the five combinations which had been tested, 110 pups in all, and found that the inheritance of Hemeralopia was turning out to be exactly what would be expected if it were the work of a recessive allele.

Having established the way Hemeralopia is inherited, we then were able to turn to that part of our stock which was involved, with a view to eliminating the offending allele. We had, of course, three types of dogs with respect to the anomaly: Group A, being those who received the dominant HAVE NORMAL VISION from both parents , Group B, being those who received one instruction from the sire and the other from the dam, and Group C, being those that received the recessive allele HAVE HEMERALOPIA from both parents. Group A puppies have normal vision and can pass only the allele for normal vision. They are the ones that we wanted in our breeding program. Group C puppies actually exhibit Hemeralopia, having no dominant shield to hide behind, and are eliminated from breeding. But what of Group B? They have normal vision but they "carry" the allele for Hemeralopia. Not only did they receive it, but also, as can be seen from the Table, they will be expected to pass it on to half of their offspring if bred. How do we distinguish Group A from Group B animals? Again by test-mating. If we mate an animal that may be a carrier to an animal that is Hemeralopic, we will get the answer. If the animal being tested is indeed a carrier (Group B), the result of the mating will be a litter of which half will be expected to exhibit Hemeralopia. If, on the other hand, the test animal is completely free of the defect (Group A), none of the pups will be affected. It must be borne in mind that all such pups, having one Hemeralopic parent, will be carriers and must be dealt with accordingly.

We were fortunate in that one of our foundation bitches was proven by test-mating not to be a carrier. She, bred to a fine American dog of a Hemeralopia-free strain, produced our now well-known "E" litter. Working with our remaining stock, bitter disappointments mounted upon one another as several animals tested proved to be carriers. However, at last we were rewarded when the first one of those who might have been a carrier was proven not to have inherited, and therefore not to be able to pass on, the allele for Hemeralopia. Recently, Irene and Bill Stone of Kelso (Reg'd) Kennels here in Ontario have similarly test-bred their stock and, like ourselves, are now able to certify puppies as being completely free of Hemeralopia. And now, after a long and costly progam, punctuated by disappointments and tears, we have the satisfaction of knowing that all of our breeding stock is free of this defect. Our systematic program has enabled us to eliminate an undesirable genetic trait from a fine line of dogs. We believe that to do so was our duty, for surely we are obliged to improve the complete dog--meaning his genetic potential as well as his individual observable characteristics.

Dr. Rubin's research has revealed that Hemeralopia is associated with enzymes which maintain supplies of the chemicals that transform light impinging upon the eye into nervous impulses of electrical energy to be carried along the optic nerve. Although it is not likely that a cure for the condition will be developed, it is probable that our understanding of the very process of seeing will be improved as a result of Dr. Rubin's work.
​
Finally, we have learned that some sled dogs in the north are called "night dogs", a title which leads us to conclude that they are probably suffering from Hemeralopia. Also, the defect has been reported from another breed, Poodles. Recently we have learned that another kennel in the U.S. and one in England, whose Malamutes are related to our foundation stock, have encountered Hemeralopia. One wonders how many cases have been undetected or ignored and how many carriers are perpetuating this defect. Had our efforts at communication issued years ago been taken seriously and had a frank exchange of information taken place, the numbers would doubtless be much smaller.